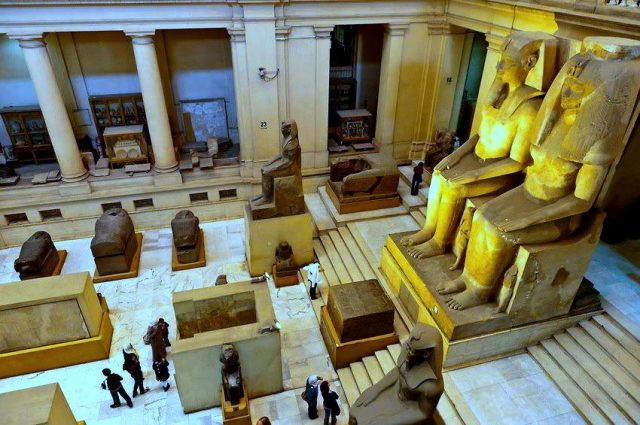 Egyptian Museum in Cairo: The Greatest Collection Of Egyptian Antiquities

One of the world’s famous museums.  It houses 250,000 antique pieces including mummies, sarcophagi and the fabulous treasures of Tut Ankh Amon’s tomb.

This Exhibition is a revival of the cultural patrimony of the Mediterranean countries undertaken by the Ancient Civilizations Institute and the Reform Revivals of Modern Period as the preset agreement between Egypt and France.

The Egyptian Museum was first built in Boulak. In 1891, it was moved to Giza Palace of “Ismail Pasha” which housed the antiquities that were later moved to the present building.

The Egyptian Museum is situated at Tahrir square in Cairo. It was built during the reign of Khedive Abbass Helmi II in 1897, and opened on November 15, 1902 .  It has 107 halls.

At the ground floor there are the huge statues. The upper floor houses small statues, jewels, Tutankhamon treasures and the mummies.

The greatest collection of Egyptian antiquities is, without doubt, that of the Egyptian Museum in Cairo. It is a place of true discovery and, even after many visits, I continue to make new and delightful discoveries every time I venture into its many galleries.

The Museum also comprises a photography section and a large library. The Egyptian museum comprises many sections arranged in chronological order :

The second section houses the pre-dynasty and the Old Kingdom monuments.

The third section houses the first intermediate period and the Middle Kingdom monuments.

The forth section houses the monuments of the Modern Kingdom.

The fifth section houses the monuments of the late period and the Greek and Roman periods.

The museum’s Royal Mummy Room, containing 27 royal mummies from pharaonic times, was closed on the orders of President Anwar Sadat in 1981.

It was reopened, with a slightly curtailed display of New Kingdom kings and queens in 1985, along with the reconstructed Royal Tomb of Akhenaten in the museum’s car park.

A hall for the royal mummies was opened at the museum, housing eleven kings and queens. More than a million and half tourists visit the museum annually, in addition to half a million Egyptians.

It is situated at Tahrir square in Cairo. Maydan at-Tahrir, Cairo, Egypt.

Best Hotel Deals Near The museum