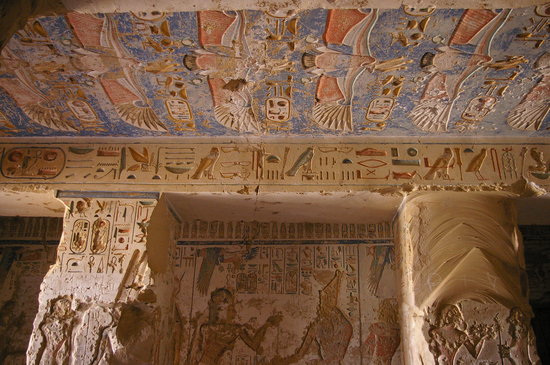 The site of El Kab, known in ancient times as Nekheb, is located 32 km (20 miles) south of Esna on the Nile’s west bank.

Activity at the site spans the entirety of ancient Egyptian history and beyond, from the Predynastic period to the Coptic era.

El Kab was the cult home of Nekhbet, the vulture goddess of Upper Egypt, who was traditionally paired with the cobra goddess of Lower Egypt, Wadjet.

The site, El Kab is littered with remains of temples, settlements, cemeteries, and rock-cut tombs, but the most impressive feature still visible is a massive mud brick town wall, which dates to the 30th Dynasty (380–343 BC).

Nekhbet’s principal temple at El Kab is found within a large mud brick enclosure wall containing additional structures, including a New Kingdom temple dedicated to Thoth, the remains of a birth house, and a small temple of Roman date (30 BC–AD 364), as well as a sacred lake.

The cliffs at the edge of the site are filled with rock-cut tombs from various periods. The most impressive of these date to the Second Intermediate Period through the early part of the New Kingdom, and include the tomb of Ahmose, son of Ibana, and the tomb of Ahmose Pennekhebt .

Both tombs contain important biographical accounts regarding the expulsion of the Hyksos from Egypt by the first king of the dynasty. Further tombs of note are those of Pahery and Renni, which date to the reign of Thutmose III.

The decoration inside the tombs is amongst the most beautiful at the site. The tomb of Pahery is especially well-known for its agricultural, boating, and funerary scenes, which include female-mourners.

El Kab was strategically located at the mouth of the Wadi Hellal. The cliffs of this wadi are covered with petroglyphs and inscriptions dating from the prehistoric era through the Late Period, attesting to its importance as a route from the Nile Valley into the Eastern Desert.

probably dedicated to Re-Horakhty, Hathor, Amun, and Ramesses II. Both temples were restored during the Ptolemaic Period.

El Kab Location: On the east bank road in between Kom Ombo and Luxor.

BY BOAT: Accessible by a private boat, such as a felucca.

BY BUS: Buses from Aswan or Luxor can drop you off at the site on request.