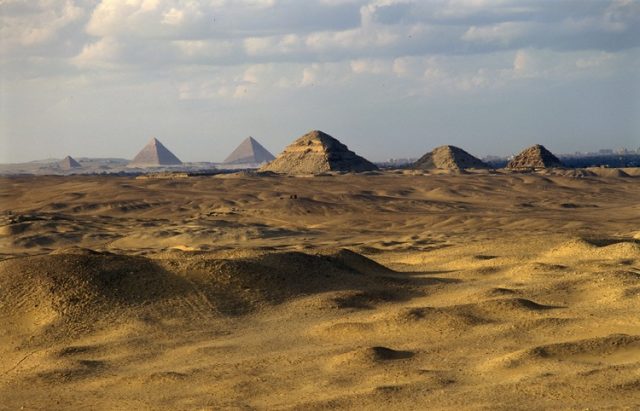 Abusir pyramids in Cairo: The missing sun temples in Egypt

Abusir is located in the desert west of Cairo, between Giza and Saqqara. The site is dominated by the remains of seven pyramid complexes, five of which can be deated securely to the 5th Dynasty (2504-2347 B.C.): those of Sahure, Niuserre, Neferirkare, Neferefre, and Queen Khentakawes II.

A number of papyrus archives have been found in association with these pyramids and their temples; these provide an important glimpse into the bureaucracy of this era.

Scattered among the royal complexes are the tombs of 5th Dynasty nobles and officials; the most impressive of these belongs to a vizier and royal son-in-law named Ptahshepses.

South of the pyramids are a number of recently-excavated Late Period tombs. One of these, the tomb of Iufaa, was found intact.

North of Abusir proper is the site of Abu Ghurob, where two solar temples, also dating to the 5th Dynasty, are still visible.

A 50% discount on admission is available to students with a valid student ID from an Egyptian University or a valid ISIC card.

South of Cairo, off Saqqara Road

BY MINIBUS: Take a bus or taxi to Pyramids Road, getting off at Maryotteya Canal, and head down to the canal, where there is a yard of minibuses. Take one from there to the village of Abusir.

BY TAXI: Ask for Abusir.

It is also possible to go there by riding a horse from Giza to Saqqara, passing the site in route.

A Visitors’ Center is under construction.