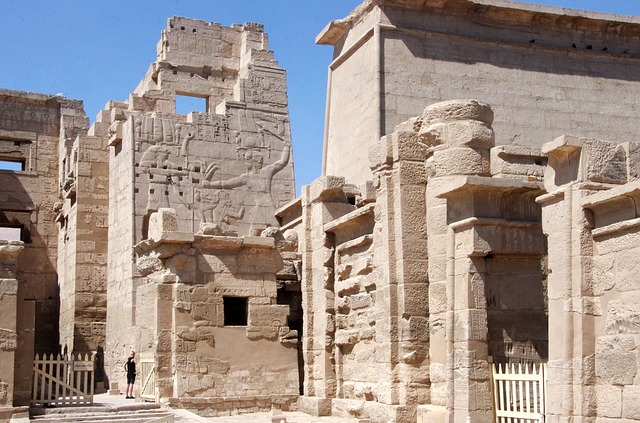 This ancient site was associated with Amun in his form as a creator and fertility god, and was imagined to be the location of the primeval mound of creation.

It lies directly across the Nile from Luxor Temple, and was the focus of several annual festivals.

In the 18th Dynasty, a temple to Amun was built here by Hatshepsut and Thutmose III.

Ramesses III, the last great warrior pharaoh of the New Kingdom, chose this site as the location of his memorial temple, and enclosed the earlier Amun temple within his complex.

The best-preserved of the New Kingdom memorial temples, Medinet Habu is decorated with scenes and texts illustrating the military victories of the king, as well as the rituals performed and festivals celebrated here.

South of the temple, linked to the first court by a Window of Appearances, is a palace for the king.

During the Late Period, several of the Divine Wives of Amun, the high priestesses and principal administrators of the Amun cult during this era, constructed their tombs in the forecourt of the temple.

On the West Bank, opposite Luxor.

BY FERRY: From Luxor, there is a local ferry that runs from the Corniche, which is labeled “National Ferryboat.” You will have to catch a taxi once you reach the west bank.

BY BUS: You should be able to rent a minibus from Luxor, many are run through hotels or tour groups.

BY TAXI: Taxis from Luxor will be more expensive, but you can ask to go maabd habu from there, or take the ferry across