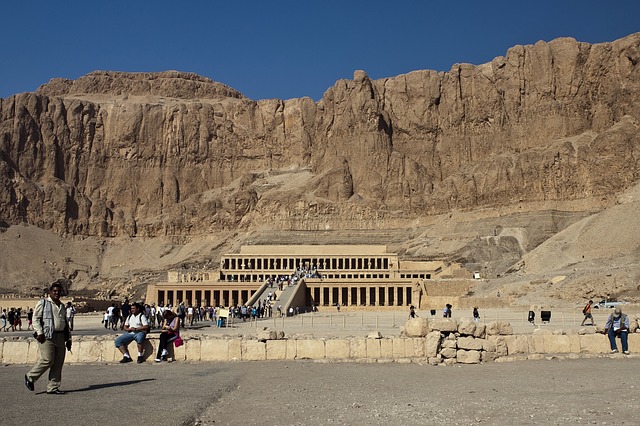 The site of Deir El Bahari is located on the western bank of the Nile almost directly opposite Karnak Temple in Luxor.

Sacred to the goddess Hathor, this bay of cliffs was chosen by Mentuhotep II, the king who reunited Egypt after the chaos of the Second Intermediate Period, as the site of his mortuary temple and tomb.

At the turn of the 20th century, Howard Carter discovered a shaft and chamber, the “Bab el Hosan” in the temple’s forecourt.

In the chamber was a statue of the king in the red crown, wrapped in linen, along with some model boats.

Within the mortuary complex were also the tombs of six royal women; two of the exquisite limestone sarcophagi from these tombs (those of Kawit and Aashait) are on display at the the Egyptian Museum, Cairo.

Today, Deir El Bahari is dominated by the great mortuary temple of the female pharaoh Hatshepsut. This elegant terraced structure, in Hatshepsut Temple, one of the most beautiful temples in Egypt, is decorated with carved reliefs illustrating some of the great events of Hatshepsut’s reign.

These include the transportation of obelisks from the quarries in Aswan to the temple of Amun at Karnak; the queen’s divine birth (legitimizing her rule through descent from the god Amun) and her coronation; and a great trading expedition to Punt.

Deir El Bahari played an important role in the annual Beautiful Feast of the Valley, during which the divine images of Amun and his family were brought from the temple at Karnak to visit the west bank.

Hatshepsut (1479-1458 BCE) was the first female ruler of ancient Egypt to reign as a male with the full authority of pharaoh. Her name means “Foremost of Noble Women” or “She is First Among Noble Women”.

The King Hatshepsut began her reign as regent to her stepson Thuthmose III (1458-1425 BCE) who would succeed her and, initially, ruled as a woman as depicted in statuary.

In around the seventh year of her reign, however, she chose to be depicted as a male pharaoh in statuary and reliefs though still referring to herself as female in her inscriptions.

Hatshepsut was the fifth pharaoh of the 18th Dynasty during the period known as the New Kingdom (1570-1069 BCE) and regarded as one of the best.

Although Hatshepsut is sometimes cited as the first female ruler of Egypt, or the only one, there were women who reigned before her such as Merneith (c. 3000 BCE) in the Early Dynastic Period (probably as regent) and Sobeknefru (c. 1807-1802 BCE) in the Middle Kingdom and Twosret (1191-1190 BCE) after her toward the end of the 19th Dynasty.

Hatshepsut, though not the first or last, is undoubtedly the best known female ruler of ancient Egypt, and one of the most successful monarchs in Egyptian history.

Hatshepsut Temple lies on the West Bank, opposite Luxor.

Hatshepsut Temple By Ferry: From Luxor, take the local ferry labeled “National Ferryboat” that runs from the Corniche. Catch a taxi once you reach the west bank to take you to the Hatshepsut Temple.

Deir El Bahari By Bus: You should be able to rent a minibus from Luxor; many are run through hotels or tour groups.

Deir El Bahari By Taxi: Taxis from Luxor will be more expensive, but you can ask to go to deir el bahri from there, or take the ferry across to the west bank and catch a taxi from the dock.

Includes admission to the Temple of Hatshepsut.

Student rates are available to bearers of a valid student ID from an Egyptian university or an International Student ID Card (ISIC).