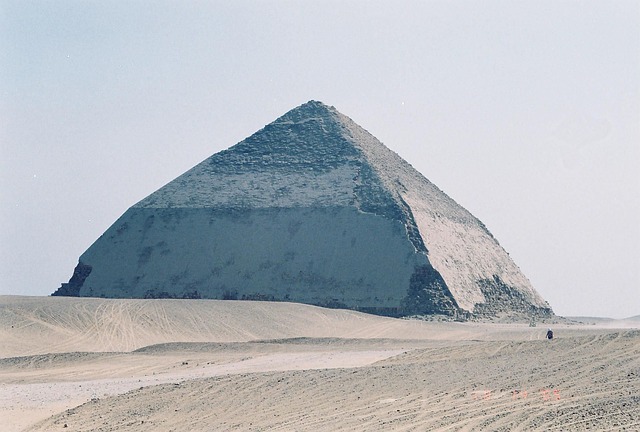 The pyramid field of Dahshur lies about 10 km south of Saqqara. The Pyramids here include the famed Bent and Red Pyramids built by the 4th Dynasty king Senefru (father of Khufu, builder of the Great Pyramid),

As well as the “White Pyramid” of Amenemhat II, the pyramid of Senwosret II, and    the “Black Pyramid,” built for Amenemhet   III.

The Bent Pyramid is the second of Sneferu’s three major pyramids. Originally designed to rise at the angle of 52°, this was decreased to 43.5° partway up.

And a girdle was built around the base, apparently because the foundations were unstable and the angle too steep for safety.

A number of undisturbed burials of Middle Kingdom queens and princesses were found in the vicinity of the pyramids of the 12th Dynasty here.

Most of this can now be seen in the Egyptian Museum, Cairo, along with the pyramidion from the pyramid of Amenemhat III.

BY MINIBUS: Take a bus or taxi to Pyramids Road, getting off at Maryotteya Canal, and head down to the canal, where there is a lot with minibuses to Dahshur

BY TAXI: Ask for “mintaqat Dahshur”

There is a WC at the site, and you may buy the basics in the nearby town.

The site is accessible by vehicle. The pyramids themselves are not wheelchair accessible.