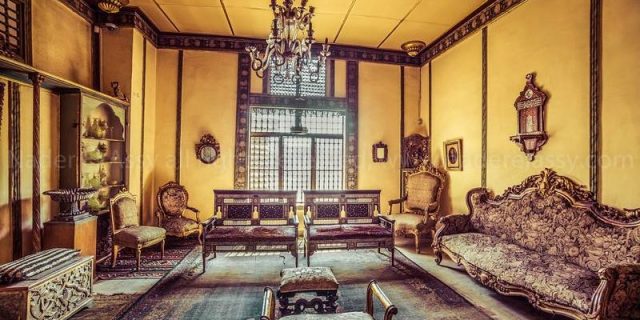 Gayer Anderson Museum In Cairo: The House Of The Cretan Woman

The House of the Cretan Woman, Bayt al-Kritliyya is an example of upper class medieval Cairene tastes.

The house is located in the southeast corner of the Ibn Tulun Mosque in Sayeda Zainab and is now part of the Gayer Anderson House complex.

The Gayer-Anderson House is actually made up of two 17th century houses stuck together.

This complex is named after a British major who lived in it and restored it earlier in the 20th century.

He filled the house with French, English and oriental furniture and other fixtures. The house has a large reception room with a balcony that overlooks it.

The balcony is enclosed with a screen through which women of the harem could discreetly watch the male visitors below.The legends about this house are almost as intriguing as the house itself.

Inhabitants of the house were said to have had the blessings of the patron saint al-Hussein who was the grandson of Muhammad.

Another legend says that the well of the house gets magical and curative waters from the Great Flood.

The Gayer Anderson Museum takes its name from Major R.G. Gayer-Anderson Pasha, who resided in the house between 1935 and 1942 with special permission from the Egyptian Government.

It is noted for being one of the best preserved examples of 17th century domestic architecture left in Cairo, and also for Gayer-Anderson’s vast collection of furniture, carpets, curio, and other objects.

The Museum was founded in 1937 in two ancient residences, the Beit el-Kiridiliya from 1632 and the Beit Amna Bent Salim from 1540.

The museum includes the private collection of Major Gayer-Anderson as well as furniture, glassware, crystal, carpets, silks and embroidered Arab costumes. The residences are reached by a private street.

The Beit el-Kiritiliya has a sabil at the southwest corner and a maqaad with a monumental entrance. The Beit Amna Bent Salim has a courtyard that is small and a single-arched maqaad.

There is a qaa that has an extremely high ceiling that runs the length of the house. Several of the rooms on the third floor have been reconstructed and some contain the collections.

Gayer Anderson Museum is located in the southeast corner of the Ibn Tulun Mosque In Sayeda Zainab &  Is now part of the Gayer Anderson House complex.