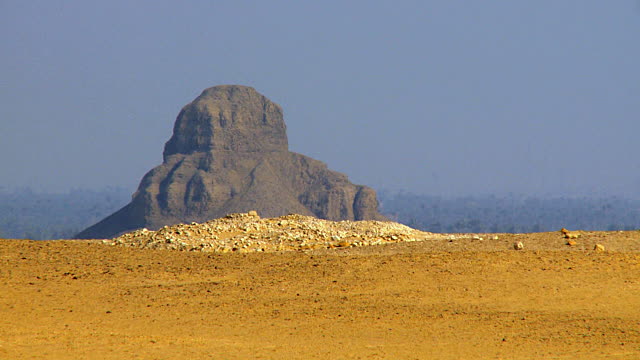 Black Pyramid : Discover The Pyramid of Amenemhat III in Egypt

Though stripped of its limestone casing and somewhat eroded, The Pyramid of Amenemhat III at Hawara or the Black Pyramid remains remarkable for its complex system of secret passages.

Amenemhat III (1855-1808 BC) built both this pyramid and the Black Pyramid at Dahshur, and it is thought that he abandoned this one because of the rising water table, which eventually flooded the burial chamber.

A number of dead ends and pits conceal the passage to the burial chamber. The chamber itself was hewn from a single piece of quartzite and contained two sarcophagi.

A bowl and a few other objects belonging to Amenemhat’s daughter Neferuptah were also found inside, which have led some to propose that she was temporarily interred in her father’s pyramid while her own was being built.

Due to the flooding, the interior of the pyramid is closed to visitors.

The pyramid complex includes a queen’s pyramid and a mortuary temple. Once elaborate and sumptuous, composed of courtyards within courtyards?

The Pyramid of Amenemhat III at Hawara

The temple, and perhaps the surrounding necropolis as well, is believed to be the Labyrinth that Herodotus praised above the Pyramids at Giza and everything the Greeks ever built. After years of quarrying, however, very little is left of this.

To the north and northeast of the Black Pyramid lies a mastaba field, where a number of Middle Kingdom officials and nobles were buried.

This also includes the Roman cemetery where Petrie found many beautiful “Fayum portraits,” wooden panels on which the faces of the deceased were painted with colored wax and then attached to the mummy. A number of these can be seen at the Egyptian Museum in Cairo.

BY BUS: Buses between Beni Suef and al-Fayoum stop at Hawarat al-Makta, which is a short walk from the pyramid.

BY TAXI: ask for “haram hawara”