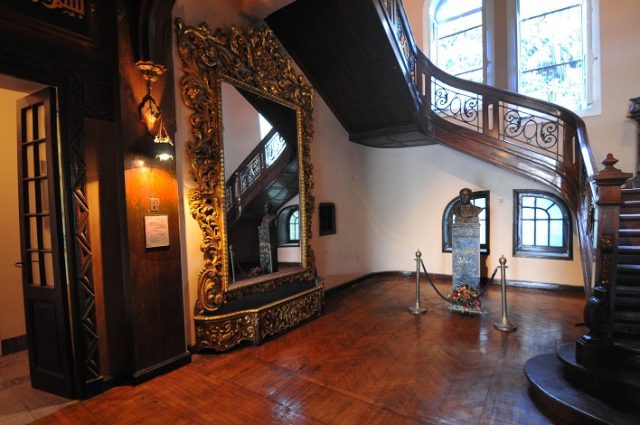 Ahmed Shawki Museum is in recognition of the great Poet-Laureate Ahmed Shawki, which houses a wide collection of more than 713 manuscripts and drafts, a collection of oil paintings, antique objects and photographs of the poet and his family.

Traditionally, a museum is known to be a place where objects of antique and historical nature are displayed. However, the modern concept of a museum has been developed so as to reflect, as well, all aspects of modern and contemporary life.

In the light of this concept, Ahmed Shawki Museum is now envisaged as a centre of comprehensive and extensive cultural dissemination that aims at cultivating man’s feelings and stimulating creativity in all fields.

Ahmed Shawki Museum can, therefore, be a melting pot, providing a tasteful and pleasant cultural mix, that reflects the unity and integrity of arts .

Poet – Laureate Ahmed shawki Museum, originally named by the poet ” Karmat Ibn Hani’e ” ( Ibn Hani’e’s vineyard), was the first of a series of museums to be yet renovated.

Karmat Ibn Hani’e was not merely the Poet – Laureate’s house but also the hub of men of letters, poets, playwrights, musicians, singers as well as a meeting place for statesmen, pressmen and other dignitaries.

With the inauguration of Ahmed Shawki Museum, the Karma is re-created anew in order to resume its older role, but with new and fresh potential.

The ultimate purpose of this cultural enterprise is to achieve the sublime goal of elevating arts and stimulating man’s creativity and noble feelings.

After his return home from exile, he no longer felt like living in El Matariya, although his house had remained intact, even unaffected throughout the period of exile.

shawki believed that his house had remained safe and intact on account of a signboard hanging on the entrance bearing the phrase ” There is no god but Allah and Mohammed is the Messenger of Allah. ”

For this reason, when he left his old house in El Matariya, he ensured that the signboard was relocated to the entrance of his new house in Giza.

During his residence in EL Matariya, shawki acquired a dahabiya (a long light-draft houseboat) on the Nile so as to be able to enjoy the view of the river.

shawki often cited a line of poetry by a Fatimid poet, recommending residence nearby the Nile: Albeit living in Egypt but not by the side.

Ahmed shawki Museum is located on the Nile Corniche in Giza. The snow-white palace is surrounded by a green garden.

Bronze statues of torch-bearing cherubim representing messengers of thought and culture bearing torches of enlightenment, are placed here and there in the garden.

Once in, you are faced with a large statue of the poet, created by late Egyptian sculptor Gamal El Seguini.

This statue was placed in this location in Karmat Ibn Hani’ 14 years ago in a ceremony marking the 50th anniversary of the poet’s death.

It is located on the Nile Corniche in Giza, 6 Ahmed Shawki Street, Between Murad St. and the Gizah Corniche, (Gamal Abd an_Nasir St.), Cairo, Egypt