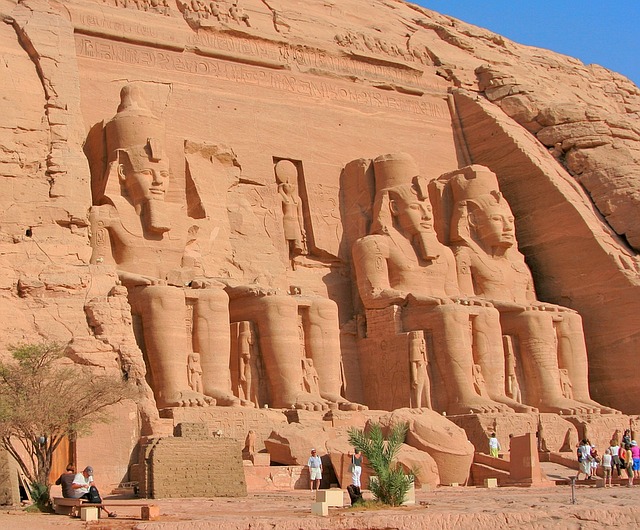 Abu Simbel temples in Aswan: Get your travel guide now

Abu Simbel temples lies far to the south of the ancient borders of Egypt, in the land of Nubia. Two magnificent rock-cut temples were built here by the 19th Dynasty pharaoh Ramesses II (ca. 1304-1237 BC). The larger of the two, the Great Temple, was dedicated to the gods Amun, Ptah, Re-Horakhty, and the deified Ramesses II, while the Small Temple was assigned to the goddess Hathor and Ramesses II’s principal queen, Nefertari.

In the early 1960’s, the global community realized that the construction of the Aswan High Dam and the subsequent creation of Lake Nasser would flood many of the monuments of Lower Nubia, including Abu Simbel temples . During a massive international campaign directed by UNESCO, the temples were cut into huge blocks and re-assembled some 65 m higher (213 ft), and 210 m (689 ft) from the river.

The more famous of the two temples is dedicated to Ramses II and the smaller one to his favorite wife Nefertari. They were both built by Ramses II in the 13th century BC. The gigantic facade of Ramses II temple represents four colossal seated figures of Ramses. The facade is 119 feet wide, 100 feet high, and the statues are each 67 feet high.

The facade door leads to the interior of the temple is a 185 feet long man-made rock cave that leads to a series of halls and rooms. The most remarkable feature of the temple of Abu Simbel is that the construction is oriented in a way that twice a year, the morning sun rays shine through the length of the inner temple cave and illuminate the statues of the four gods seated at the end of the cave.

Includes admission to the Great Temple and the Small Temple. Tickets for the Sound and Light show must be purchased separately.
Egyptian: 4 LE
Foreign: 10 USD
A 50% discount on admission is available to students with a valid student ID from an Egyptian University or a valid ISIC card.

280 km south of Aswan on the shores of Lake Nasser

BY AIR: EgyptAir flies between Aswan and Abu Simbel temples . The flight takes about an hour.

BY BUS OR TAXI: Abu Simbel can be reached by car or bus from Aswan. Arrange with the front desk of your hotel to be picked up between 3:00 and 3:30 AM by bus or taxi. All vehicles leave at 4:00 AM in convoy. The trip takes about three hours each way.

For public transportation, Upper Egypt Bus Co. and El Gouna both run regular buses up to Abu Simbel from the central bus station in Aswan. The return buses leave from the Wadi El Nile Restaurant in Abu Simbel.

1- There are a tourist bazaar and café near the entrance to the site.

2- NO PHOTOGRAPHY PERMITTED INSIDE THE TEMPLES

3- The site is wheelchair accessible.